‹ back to previous page

Almighty ever-living God, who, when Christ had been baptised in the River Jordan and as the Holy Spirit descended upon him, solemnly declared him your beloved Son, grant that your children by adoption, reborn of water and the Holy Spirit, may always be well pleasing to you. Through our Lord Jesus Christ, your Son, who lives and reigns with you in the unity of the Holy Spirit, one God, for ever and ever.

Today the Church celebrates the Solemnity of the Baptism of Our Lord. This brings to an end the season of Christmas. The Church recalls Our Lord’s second manifestation or epiphany which occurred on the occasion of His baptism in the Jordan. Jesus descended into the River to sanctify its waters and to give them the power to beget sons of God. The event takes on the importance of a second creation in which the entire Trinity intervenes.

In the Eastern Church this feast is called Theophany because at the baptism of Christ in the River Jordan God appeared in three persons. The baptism of John was a sort of sacramental preparatory for the Baptism of Christ. It moved men to sentiments of repentance and induced them to confess their sins. Christ did not need the baptism of John. Although He appeared in the “substance of our flesh” and was recognized “outwardly like unto ourselves”, He was absolutely sinless and impeccable. He conferred upon the water the power of the true Baptism which would remove all the sins of the world: “Behold the Lamb of God, behold Him Who takes away the sin of the world”.

Customs on the Feast of the Baptism of the Lord
In the Ukraine the faithful gather in the front of the church where a cross of ice is placed. Since there are no rivers near churches, a tub is filled with water and is placed in front of the ice cross. During special and very unique services the water is blessed and brought home. This is taken in before breakfast is eaten. The remains are kept during the year to keep the home safe from fire, lightening and sickness.

The priest visits his parishioners to bless their homes with the holy water that the New Year may be one of cooperation with the gift of God; His Son and the participation in the Life He has come to lead us in toward Salvation. The evening meal is very much a repeat of the Holy Supper except that there are no restrictions on meat and dairy products. It starts with Kutia, which has been saved from Christmas Eve.

Feast of the Baptism of Christ – Day Nineteen 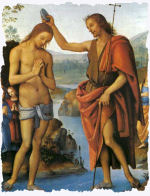 Today we celebrate the baptism of Christ in the Jordan. This is the second epiphany, or manifestation, of the Lord. The past, the present, and the future are made manifest in this epiphany.

The most holy one placed Himself among us, the unclean and sinners. The Son of God freely humbled Himself at the hand of the Baptist. By His baptism in the Jordan, Christ manifests His humility and dedicates Himself to the redemption of man. He takes upon Himself the sins of the whole world and buries them in the waters of the Jordan. — The Light of the World by Benedict Baur, O.S.B.

The Feast of the Baptism of the Lord 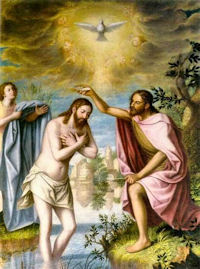 The mystery of Christ’s baptism in the Jordan by St John, the Precursor, proposes the contemplation of an already adult Jesus. This mystery is infinitely linked to the Solemnities of the Lord’s birth and the Epiphany that we have just celebrated, as in some ways it takes up and represents their significance to us.

At Christmas we have contemplated the human birth of the Word incarnate by the Virgin Mary. In the 4th century, the Fathers of the Church deepened the understanding of the faith with regard to the Christmas mystery in the light of Jesus’ Humanity. They spoke of the Incarnation of the Word already working like the ‘Christification’ of that humanity that he had assumed from His mother. Or put in simpler terms: Jesus is the Christ from the first instant of conception in Mary’s spotless womb because He Himself, with His Divine Power, consecrated, anointed and ‘Christified’ that human nature with which He became incarnate.

In the mystery of the Epiphany, we then meditated on Christ’s manifestation to all nations that was represented by the Magi, the wise men from the East, who came to adore the Child.

Now, in the mystery of Christ’s Baptism in the Jordan River, we again encounter and represent the truth of the Lord’s incarnation and His manifestation as the Christ. Jesus’ Baptism is in fact His definitive manifestation as the Messiah or Christ to Israel, and as the Son of the Father to the entire world. Here we find the dimension of the Epiphany which was His manifestation to all nations. The Father’s voice from heaven shows that Jesus of Nazareth is the eternal Son and the descent of the Holy Spirit in the form of a dove shows the Trinitarian nature of the Christian God. The true and unique God, Father, Son, and Holy Spirit, shows Himself in Christ, through Him, with Him and in Him.

The Baptism in the Jordan returns to the great Christmas theme of ‘Christification,’ Jesus of Nazareth’s spiritual anointing, His presentation as the Anointed One par excellence, the Messiah or the One sent by the Father for the salvation of mankind. The Spirit that descended on Jesus shows and seals in an incontrovertible way the ‘Christification’ of Jesus’ humanity that the Word had already fulfilled from the first moment of His miraculous conception by Mary. Jesus, from the very beginning, was always the Lord’s Christ, He was always God. Yet, His one, true humanity, that which is perfect in every way, as the Gospel records, constantly grew in natural and supernatural perfection. ‘And Jesus increased in wisdom, in stature, and in favour with God and with men’ (Lk2:52). In Israel at 30 years of age, one reached full maturity and therefore could become a master. Jesus came of age and the Spirit, descending and remaining on Him, definitively consecrated His whole being as the Christ.

The same Spirit, that descended on the water of the River Jordan wafted over the waters during the first creation (Gen 1:2). Therefore, the Baptism in the Jordan presents yet another truth: that Jesus has started a new creation. He is the second man (1 Cor 15:47) or the last Adam (1 Cor 15:45), that comes to repair the first Adam’s guilt. He does this as the Lamb of God that takes away our sins. ‘Looking at the events in light of the Cross and Resurrection, the Christian people realised what happened: Jesus loaded the burden of all mankind’s guilt upon His shoulders; he bore it down into the depths of the Jordan. He inaugurated his public activity by stepping into the place of sinners’ (Joseph Ratzinger, Jesus of Nazareth, Bloomsbury 2007, p 18).

Excerpted from the Congregation for the Clergy

We regret to announce the following deaths

Our Parish in Pictures