O God, who have called us to participate in this most sacred Supper, in which your Only Begotten Son, when about to hand himself over to death, entrusted to the Church a sacrifice new for all eternity, the banquet of his love, grant, we pray, that we may draw from so great a mystery, the fullness of charity and of life. Through our Lord Jesus Christ, your Son, who lives and reigns with you in the unity of the Holy Spirit, God, for ever and ever.

The last three days of Holy Week are referred to as the Easter or Sacred Triduum (Triduum Sacrum), the three-part drama of Christ’s redemption: Holy Thursday, Good Friday and Holy Saturday.

Holy Thursday is also known as “Maundy Thursday.” The word maundy comes from the Latin word mandatum (commandment) which is the first word of the Gospel acclamation:

Mandátum novum do vobis dicit Dóminus, ut diligátis ínvicem, sicut diléxi vos. “I give you a new commandment: Love one another as I have loved you.” (John 13:34)

…They included: (1) the eating of the Easter lamb or the paschal meal; (2) the washing of the disciple’s feet; (3) the institution of the Most Holy Eucharist (the first Mass at which Jesus Christ, the eternal high priest, is the celebrant; the first Communion of the apostles; the first conferring of Holy Orders); (4) the foretelling of Judas’ betrayal and Peter’s denials; (5) the farewell discourse and priestly prayer of Jesus; (6) the agony and capture of Jesus in the Garden of Olives. — ©1947, With Christ Through the Year

In all the German speaking countries, Slavic nations and in Hungary this day is also known as “Green Thursday.” The word is a corruption of the German word grunen (to mourn) to the German word for green (grün). Many people believe they must eat green at today’s meal, which is probably derived from from the Jewish Passover meal that included bitter herbs.

Mass of the Lord’s Supper 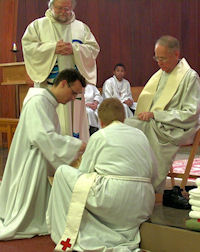 During the evening of Holy Thursday, the Mass of the Lord’s Supper is celebrated. It is celebrated in the evening because the Passover began at sundown. There is only one Mass, at which the whole community and priests of the parish participate. This is a very joyful Mass, as we recall the institution of the Holy Eucharist and the priesthood. The priests wear white vestments, the altar is filled with flowers, the Gloria is sung and the bells are rung. After the Gloria, we shall not hear organ music and the bells until the Easter Vigil. The Liturgy of the Mass recalls the Passover, the Last Supper, which includes the Washing of the Feet. The hymn Ubi Caritas or Where Charity and Love Prevail is usually sung at this time. After the Communion Prayer, there is no final blessing. The Holy Eucharist is carried in procession through Church and then transferred into a place of reposition, usually a side chapel. The hymn Pange Lingua is also usually sung at this time.

After the Mass, we recall the Agony in the Garden, and the arrest and imprisonment of Jesus. The altar is stripped bare, crosses are removed or covered. The Eucharist has been placed in an altar of repose, and most churches are open for silent adoration, to answer Christ’s invitation “Could you not, then, watch one hour with me?” (Matt 26:40)

The Altar of Repose 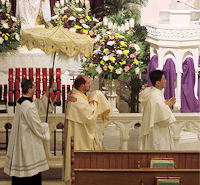 When the Eucharist is processed to the altar of repose after the Mass of the Lord’s Supper, we should remain in quiet prayer and adoration, keeping Christ company. There is a tradition, particularly in big cities with many parishes, to try and visit seven churches and their altar of repose during this evening.

Popular piety is particularly sensitive to the adoration of the Most Blessed Sacrament in the wake of the Mass of the Lord’s supper. Because of a long historical process, whose origins are not entirely clear, the place of repose has traditionally been referred to as “a holy sepulchre”. The faithful go there to venerate Jesus who was placed in a tomb following the crucifixion and in which he remained for some forty hours.

It is necessary to instruct the faithful on the meaning of the reposition: it is an austere solemn conservation of the Body of Christ for the community of the faithful which takes part in the liturgy of Good Friday and for the viaticum of the infirmed. It is an invitation to silent and prolonged adoration of the wondrous sacrament instituted by Jesus on this day.

In reference to the altar of repose, therefore, the term “sepulchre” should be avoided, and its decoration should not have any suggestion of a tomb. The tabernacle on this altar should not be in the form of a tomb or funerary urn. The Blessed Sacrament should be conserved in a closed tabernacle and should not be exposed in a monstrance.

After midnight on Holy Thursday, the adoration should conclude without solemnity, since the day of the Lord’s Passion has already begun.

Washing of Feet and a “Last Supper” Meal 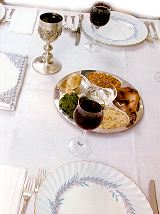 In imitation of Christ’s last supper, many Christians prepare a meal reminiscent of how Christ celebrated the Last Supper. We see the lamb, cooked whole, with no bones broken, foreshadowing the death of Christ, the Lamb of God. We eat the unleavened bread and recall to mind the Eucharist. We eat the whole meal in prayerful reminder of that Last Supper that Jesus spent with His apostles, His friends, instituting Holy Orders and leaving His greatest gift, the Holy Eucharist.

A representative paschal meal can include roast lamb, bitter herbs, green herbs, haroset, matzoh and wine and perhaps include readings from the Mass of the Lord’s Supper. Our Passover Feast is the Mass, in particular the whole Triduum. The US Bishops have discouraged Catholics to “baptizing” a Jewish Seder meal, and the Vatican has issued recent documents on Catholic relations with Jews. For more information see USCCB: God’s Mercy Endures Forever: Guidelines on the Presentation of Jews and Judaism in Catholic Preaching and Commission of the Holy See for Religious Relations with the Jews.